Year in and year out, Jordan Brand learns from their work and feedback from their athletes as to where the signature line should be headed. For the Air Jordan XXXVI, MJ challenged the design team to push the envelope further, to go lighter than ever before. We’ve seen the shoe shed drastic weight with the XXXIV and XXXV, and the trend continues with the XXXVI, the lightest ever for Air Jordan line.

The Air Jordan had been at the pinnacle of basketball performance, bringing innovation to the forefront, bringing new technologies to the consumer to best serve them. For the Air Jordan XXXVI, we get to see three key innovations – the jacquard leno-weave upper, the full-length Zoom Air Strobel unit that’s double-stacked at the forefoot, as well as a refined Flight Plate system, all focused as the focuses on ‘Light’.

“We want those who love the brand to see something that’s always been a part of our design legacy: the power of teamwork that goes on between a core group of folks to create product excellence,” says Martin Lotti, VP, Jordan Brand Design. “Jordan Brand is inspired by one man, but it’s carried into the future by many, many people who are experts in their field.”

While we have heard of the Flight Plate and the Zoom Air Strobel Unit before, the newest material here is the jacquard leno-weave upper. The material is breathable to the point that the upper is see-through, allowing light and other colors to shine through. The weave keeps the upper lightweight but strong, bending and moving with the user’s foot, providing support where it’s needed the most.

“Within the basketball landscape, we wanted to create a new language for light,” says Jacqueline Lefferts, Jordan Brand Lead Materials Designer. “We asked ourselves, What does light look like? It’s a product of the upper’s weight, but it’s also a trait of the upper itself in that light is a defining quality.”

In basketball, lightweight on its own isn’t enough to create game-separating movement. Lightweight has to combine with a feeling or a sound — a pop that returns the force a player puts into the court. 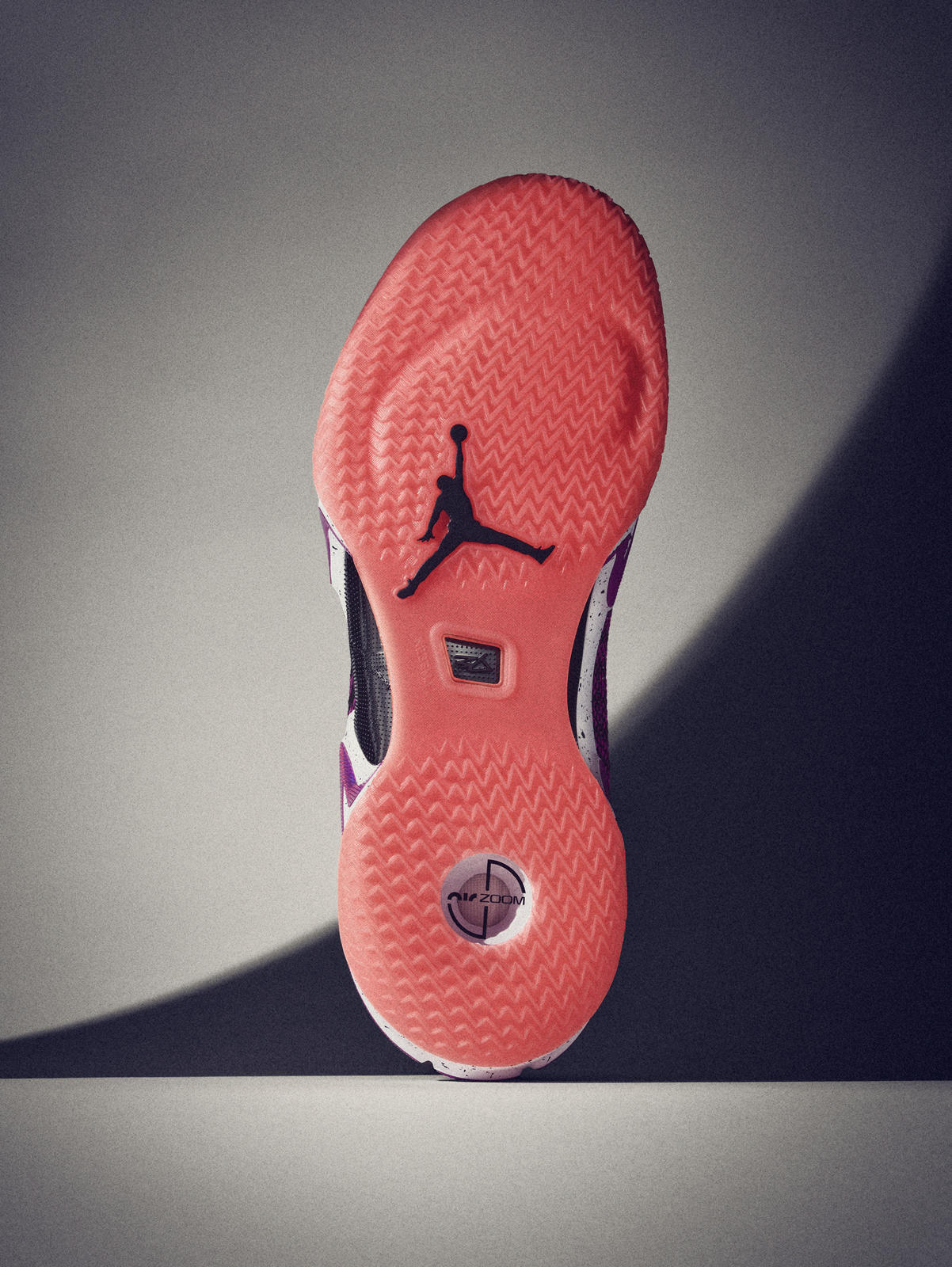 For the shoe’s traction, the Air Jordan XXXVI uses a multi-directional herringbone traction pattern. This provides the player with proper change in direction and control without losing quickness. Peeking through the heel window is the shoe’s full-length Zoom Strobel unit, while being double-stacked with more Zoom Air in the forefoot. The shoe boasts of the most Zoom Air ever incorporated into the Air Jordan.

“One trend we noticed in the basketball market is how lightweight is typically described as a performance feature, which has been heavily marketed as ball handling and foot-to-court movement. All that is a fundamental part of the game, but the origins of the Jordan Brand were about tapping into the time off the floor, the hangtime, the flight,” says Chad Troyer, Jordan Brand Senior PLM. “In bringing in the Zoom Strobel and adding another Zoom unit beneath that, we were working toward that ‘pop’ for players so they can get of the floor quickly.”

Over the last few months, we’ve seen the Jordan Brand roster grow, bringing in younger athletes that reflect the brand. From Zion, Luka, Jayson Tatum, Kia Nurse, and Satou Sabally (above), these athletes represent where the brand is headed and having a shoe that reflects their game is a must.

“The Jordan Brand Design team really did their thing,” says Satou Sabally, forward for the Dallas Wings. “The 36 is amazing. It’s super light. When you pick it up, you don’t just feel it — you see it. I knew from the minute I put it on that it’s going to be fun to play in.” 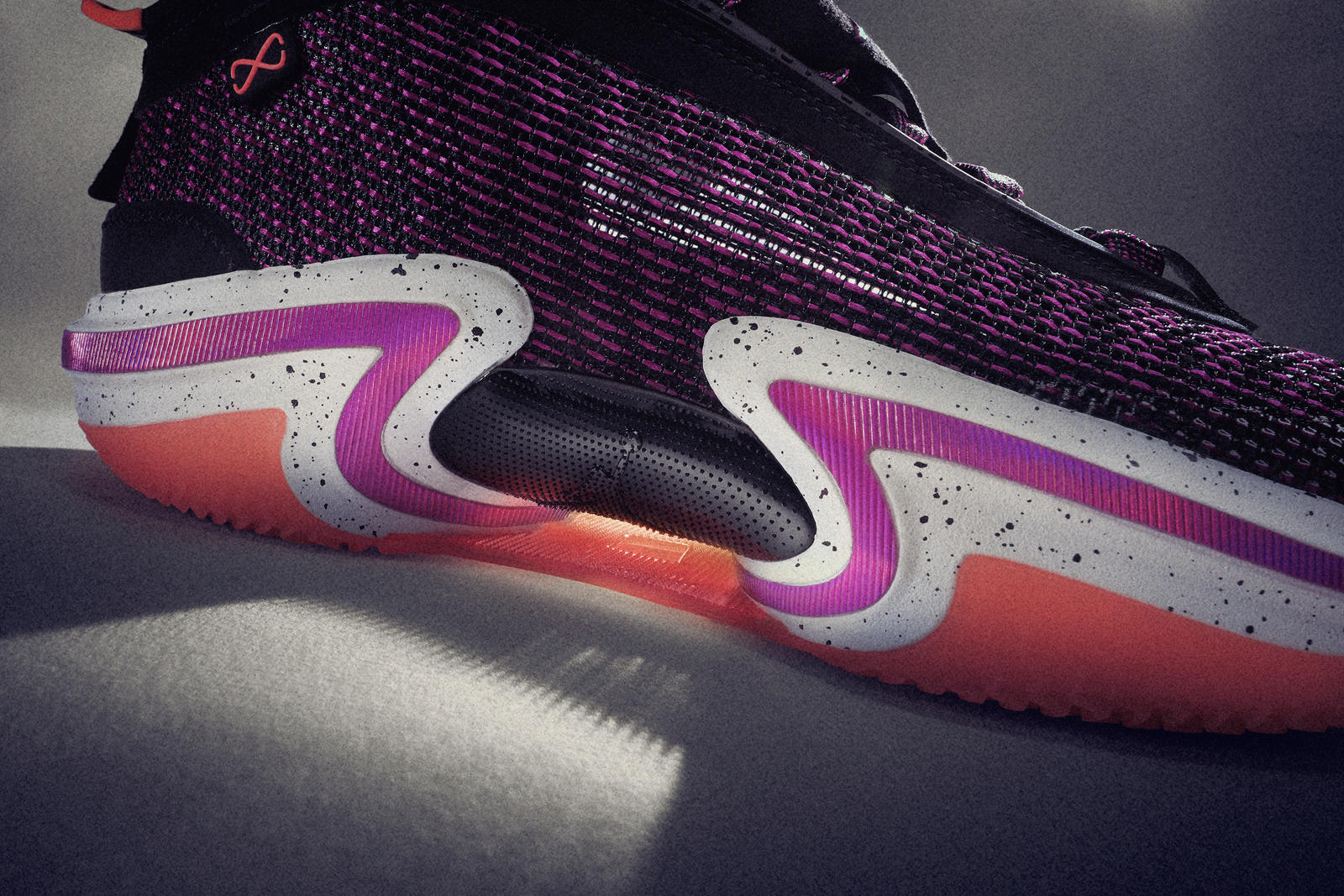 The last two pairs – the Air Jordan XXXIV and XXXV’s most evident design language was the Flight Plate and Eclipse Plate. For the XXXVI, Jordan did away from exposing them but enclosed them to connect a foam ribbon design seen through the shoe’s midsole. This also was meant to resemble the infinity symbol. The heel helps protect against impact, while the force is loaded on to the plate launched into the forefoot.

A lot of the other design elements of the shoe are a call back to the Air Jordan VI, from the lace cover, outsole cutouts and embellishments on the heel. All of these remind us of MJ when he won his first chip in Chicago. The chain design on the heel represent’s his Airness’ 6 rings and the gold chain we’ve seen MJ rock from time to time.

The Air Jordan XXXVI drops today, August 16, in the ‘Glory’ colorway, with the shoe retailing for Php 9,695. Head on over to the Nike app and pick them up now.